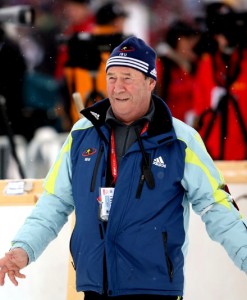 Vice President of the Russian Biathlon Union (RBU), International Judge, honored coach of Russia, the largest international expert in the design and construction of the biathlon facilities Vadim Ivanovich Melikhov described the technical readiness of stadium for the World Cup Biathlon and other institutional subtleties.

It would be strange if we was didn’t see Vadim Ivanovich Melikhov in training of the Winter Sports Center named in honor of A. Filipenko to the World Cup Biathlon. Khanty-Mansiysk for Vadim Ivanovich as a mother house. One of the pillars of the national biathlon construction (the participant of the construction of the first specialized complex in Raubichi – in the early ’70s), finds no peace today. Beginning in 1997, all that is done in the Khanty-Mansiysk Center of skiing, it is done under the watchful supervision.

“Preparation of the stadium for the Biathlon World Cup 2013 in Khanty-Mansiysk is in normal mode,” – said Vadim Ivanovich. “Back in October, during the inspection routes haven’t made any comments. This is despite the fact that the old stadium elements caused serious damage. Did a tremendous work. Piste and technical installations is much safer now. Our current inspection of – a standby arrangement. The stadium was prepared perfectly, although some of the recommendations, of course, are made. First, you need to make rational use of the width of the tracks. I mean, not really suitable markings, especially on the turns. Second, the placement of billboards have to be creative – efficient use of space, and, at the same time, to create a good environment for the audience. One more thing – is to slightly change the lighting in the wax-cabs to servismenov easier to work and the light falling on the table, and not in their eyes. “

As for the reception of teams participating competitions Melikhov Vadim made ​​the following comments:

– To date, the exact number of countries taking part in the World Cup. Accepted 32 applications. At the moment, negotiations are under way related to the delivery of athletes from Sochi in Khanty-Mansiysk. Flight plan in the 3 passenger aircraft, as well as 1 – and their baggage.

Biathlon – it’s not just competition. It is a public holiday, the organization that also has its own specifics. “We need to hear the commentator in the stadium and the fans that are along the route. And in places the route, where they accumulate a lot of it makes sense to set TV screens (so in Oberhof and Ruhpolding), “- said Vadim Ivanovich. “It is also worth thinking about how to display a broadcast of the work, not only in the stadium, but also in the center of the city (in Khanty-Mansiysk for this all is). Let the whole city in the days of World Cup Final live biathlon – you want to make the holiday was not the only place where the competitions are held. Summing up their own experience, I can say that the Khanty-Mansiysk is fully prepared for the Biathlon World Cup in 2013, and in mid-March, the whole world will witness a bright finish Cup season. “